Grains are everywhere! Not only are they at the bottom of the USDA Food Pyramid and Canada’s Food Guide (and most of the food guides in other countries) (1), they are also on almost every shelves of the grocery store.

What does the term grains include exactly? 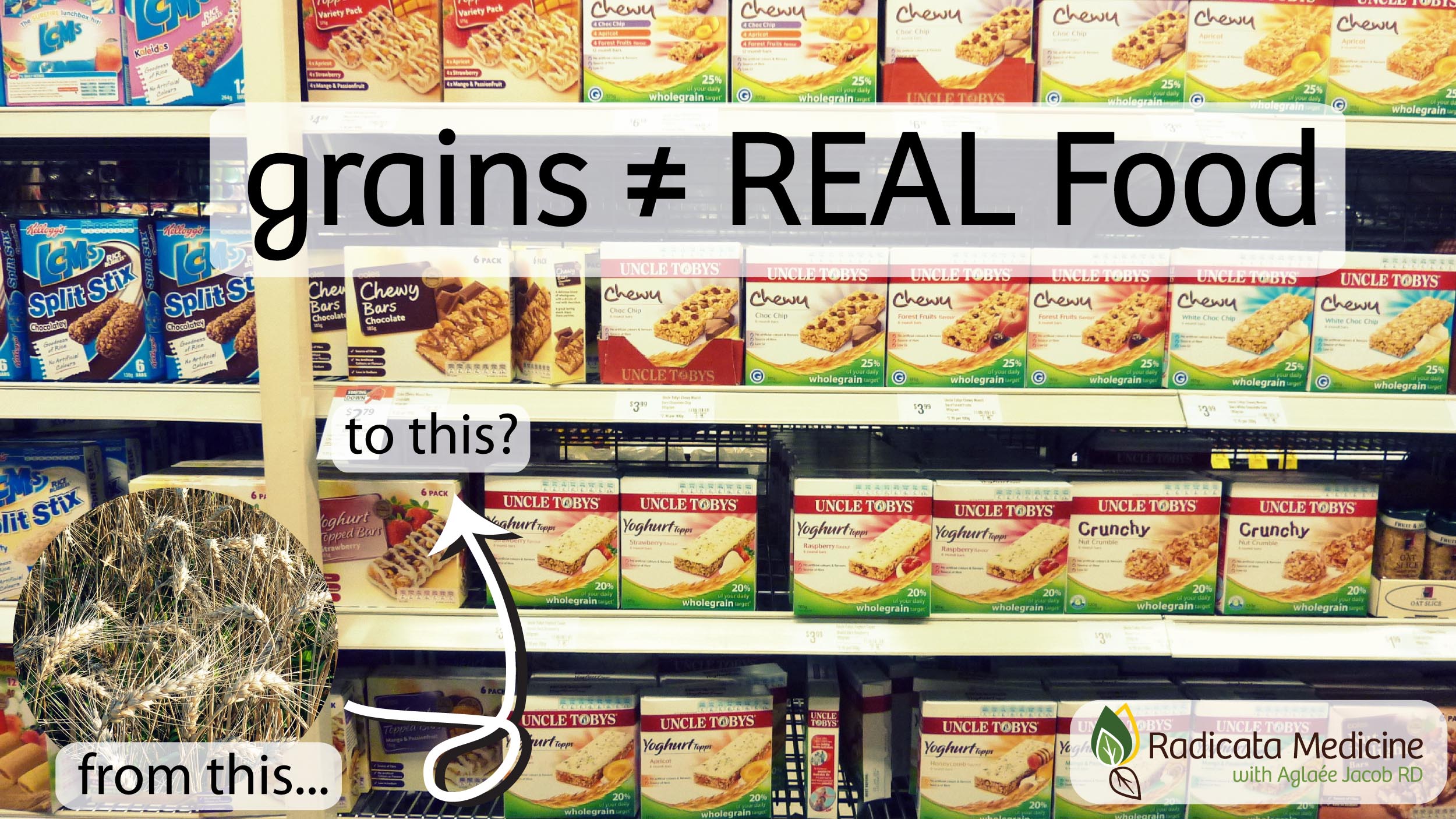 Here are some of the most commonly consumed grains that appear on at almost each meal of the daily menu of most people:

Besides the obvious flour-based foods, grains
also hide in MOST processed foods as a thickener,
seasoning or disguised in some other ways…

Read the ingredient lists of the food in your cupboards and you’ll be surprised to see that grains are present almost everywhere, hidden as texturized vegetable protein, flavoring, thickener, starch, farina, roux, malt, broth, bulgur, durum, graham flour, semolina seasonings, spice blends and so on… Sometimes it may be clear on the label, sometimes not.… do you really know what is in your food?

Grains in the human diet

Although most traditional nutritional recommendations include plenty of grains, we now know that our ancestor hunter-gatherers did not include them in their diet. The first civilizations that did had their height shrunk from an average of 5’9” for men and 5’5” for women down to 5’3” for men and 5‘ for women. What is left of their bones and teeth shows poor health. (2,3) Many Egyptian mummies show signs of obesity and heart disease, probably because of the grains they introduced in their diet since they did not have access to sugar, except for occasional small amounts of honey. (4)

Gluten, or rather its gliadin fraction, is a type of protein found in most, but not all, grains, such as wheat, barley, rye and most oats. Although gluten-free diets used to be prescribed solely to people diagnosed with celiac disease, we now know that there are other forms of gluten intolerance and gluten sensitivity  that can benefit from a gluten-free diet. (5, 6)

Gluten is very hard to digest and can damage your gut lining,whether you experience gastrointestinal symptoms or not. (7) Gluten increases the permeability of your intestines, causing a leaky gut, which can make it easier for incompletely digested compounds and other harmful substances that should stay in your gut (pooh!) to enter your bloodstream and cause problem.

Some of the most common conditions and symptoms associated with gluten are:

Unfortunately, current testing for gluten intolerance/sensitivity is not as reliable as the ones used for diagnosing celiac disease. The best (and least expensive) way to figure out if gluten may be a problem for you is to follow an elimination diet, as explained in details in Digestive Health with REAL Food. Cut out gluten and grains from your diet for at least a month and then reintroduce them again. If your symptoms decrease while eating gluten-free and come back after the elimination diet, you will know that a gluten-free and grain-free diet is optimal for you.

Phytic acid, or phytates, is an antinutrient that is only found in plant-based foods, which use it as a way to store energy in the form of phosphorus. Ruminants, like cows, have the enzyme, phytase, required to break it down, but we do not.

Grains and legumes have the highest phytic acid content, although this antinutrient is also found in nuts and seeds. Fruits and vegetables have almost none. For example, wheat bran muffin, oatmeal and wheat bran respectively have 498 mg, 943 mg and 3,011 mg of phytic acid per 100 g, while avocado, broccoli and collard greens have less than 18 mg per 100 g. (3,8)

The main problem with phytic acid is that it binds to the precious minerals you consume, especially calcium, iron, magnesium and zinc, preventing you from absorbing them properly. (9)

Avoiding grains is an effective way to decrease your phytic acid intake and allows you to correct or prevent mineral deficiencies, which are associated withmuscle cramping, skin problems, osteoporosis, PMS (pre-menstrual syndrome), fatigue, anemia, osteoporosis, reproduction, poor immunity (more infections and illnesses) and many other ailments.

Lectin is another type of antinutrient found in especially high amounts in grains, legumes, nuts and seeds. (3,10)

When you eat plant-based foods, you eat their reproductive systems. Animals have a chance to defend themselves by running away from you, but plants had to come up with a different kind of defense system to allow them to survive.Lectin is part of plants’ biological arsenal.

Lectin has a protective role for the plant by irritating your digestive system so you don’t digest its seeds, which is needed for the reproduction and survival of their specie. Some people may experience diarrhea, bloating, nausea, reflux or vomiting when ingesting lectins. Whether you experience symptoms or not, lectins can damage your gut lining, impair nutrient absorption, compromise your gut flora and interfere with your immune system. (11) Lectins are also involved in impaired intestinal permeability, or leaky gut, which allows undigested particles (pooh!) to pass from your intestines into your blood and causing problems. (3)

Some types of lectins, such as wheat germ agglutinin or WGA, can also trigger an autoimmune response, which means that your body starts attacking its own organs and tissues, leading to or worsening autoimmune diseases like most cases of hypothyroidism (Hashimoto’s thyroiditis) and rheumatoid arthritis. (12)

Phytic acid and lectins are not the only antinutrients found in grains. Alpha-amylase inhibitors and protease inhibitors are two others that can interfere with the enzymes your digestive system produces to properly digest food. (3)

Alpha-amylase is the enzyme required to break down starch and although it may appear like a good thing for people with blood sugar issues or diabetes, alpha-amylase inhibitors can have negative effects on the health of your pancreas in the long-term. (3)

Protease is the enzyme required to break down proteins into amino acids your body is able to use. Protease inhibitors in grains can compromise your protein digestion and absorption.

Chronic exposure to these antinutrients has been poorly studied and is not known. (3)

In addition to preventing you from absorbing the nutrients found in the food you eat because of their mineral-binding phytic acid, gut-irritating lectins and gluten and other problematic antinutrients, grains are a poor source of bioavailable nutrients compared to meat, seafood, vegetables and fruits. (13)

Vitamins: Grains lack vitamin A and beta-carotene, vitamin C and many B vitamins (especially vitamin B12).

Minerals: The high phosphorus to calcium ratio of grains and food products made from grains and flour can promote bone loss. Although some grain products are enriched with iron, it is the non-heme form, which is not as readily available for your body. The bioavailablity of other important minerals like zinc, copper and magnesium is also lower in grains compared to animal foods. (3)

Protein: The protein found in grains is incomplete because it lacks lysine and is low in threonine, two essential amino acids your body needs. (3) Animal protein on the other hand is always complete with the right proportion of amino acids.

Unhealthy fats: The high omega-6 content of grains can also contribute to a high omega-6 to omega-3 ratio in your diet, which is associated with inflammation. Inflammation is the root cause of many of today’s chronic diseases, including cardiovascular diseases, some cancer, arthritis and various autoimmune diseases. (14)

This is why the Paleo diet is so effective. Its basic principle is to eat REAL food. Real food is nutrient-dense and can help you meet all of your dietary requirements to stay healthy and prevent diseases.

Carbohydrates are the main source of energy and calories in grains and food products made from flours. Many Americans get over 300 grams of carbohydrates in their diet every day, which corresponds to over half of their calories, mostly from grains and sugar as found in breads and baked goods.

A high-carbohydrate diet can contribute to insulin resistance, weight gain, obesity, metabolic syndrome, prediabetes, type 2 diabetetes, some cancers and PCOS (polycystic ovarian syndrome). (15, 16)  Contrarily to popular beliefs, carbohydrates are not essential. (17) There is no such thing as carbohydrate deficiency. We do need glucose, but it can be obtained either from vegetables, fruits and tubers or synthesized from protein (neoglucogenesis). Limiting carbohydrates by avoiding grains is a safe and effective approach to lose weight, improve your blood pressure, cholesterol levels, blood sugars, insulin resistance and other metabolic problems. (15, 16)

Grains, especially refined ones, can stimulate your appetite and stimulate food cravings by making your blood sugar levels fluctuate and disrupting the fragile balance between your hunger and satiety hormones (leptin, grehlin, peptide YY or PYY, and cholecystokinin or CCK). (18)

Grains contain opioid peptides, similar to those found in drugs, that can create an addiction. (19) Although the effect is mild, eating grains at every meal every day may make you eat enough opioids to make you think that you couldn’t live without bread, pasta or cookies.

Some grains, especially wheat and rye, and most legumes contain short-chain fermentable carbohydrates, mainly fructans and galactans, also known as FODMAPs, which can be very problematic if you have IBS, fructose malabsorption or suffer from any gastrointestinal problems. (20)

Grains are not produced and could never be produced in a sustainable manner. Immense fields with monocultures of wheat, corn and other grains are detrimental to the biodiversity and health of our planet. (21, 22) Know where your food comes from.