A new very well-done scientific study is confirming what other studies had already shown:

While most health care practitioners only recognize celiac disease as a valid reason to eliminate gluten from your diet, this study is showing that the gluten-free “fad” should be taken seriously. I can’t tell you how many people I’ve met telling me that their doctor, gastroenterologists and even registered dietitians either dismissed the validity and health benefits of going gluten-free or were completely ridiculed for even asking about it.

And I am even sicker of the so many people out there
feeling sick because of gluten and not knowing about it.

Just in case you’re still not too sure what gluten is, it is a protein found in some grains. Mostly wheat, barley, rye and most oats (unless specifically labelled gluten-free). But unfortunately, avoiding gluten is not as simple as avoiding these grains and the obvious foods made from their flours, such as bagels, bread, croissants, breakfast cereals, pasta, couscous, granola bars, crackers, cookies, cakes and donuts…

The food industry has found thousands of uses for gluten-containing ingredients derived from these grains. This means that you can find gluten in unexpected foods, such as seasoned rice, soups, sauces, marinated meat, deli meat, soy sauce, broth and bouillon cubes and many more… And yes, it’s in beer too. Sorry! 😉

What are the symptoms of gluten sensitivity?

Gluten sensitivity can be associated with pretty much ALL the symptoms in the world.

Most people think of digestive problems first and while it certainly can be a big part of it (bloating, nausea, vomiting, diarrhea, constipation, abdominal pain, cramping, reflux…), gluten can cause problems beyond the gut too. For some people, it can affect their mood (anxiety, depression, behavioral issues) and cognition (fatigue, brain fog, memory issues, lack of concentration and metal clarity), for others it can be their skin, their joints, their muscles or be responsible for other food intolerances.

Headaches, migraines, hormone imbalances, inflammation and exacerbate the symptoms of an autoimmune condition.

And if you are genetically susceptible to an autoimmune condition (meaning that it is in your family), eating gluten might put you at increased risk of developing an autoimmune condition yourself (according to research from Dr. Fasano).  Autoimmune conditions include celiac disease, Crohn’s disease, ulcerative colitis, rheumatoid arthritis, type 1 diabetes, most hypothyroidism (Hashimoto’s thyroiditis), fibromyalgia, ankylosing spondylitis, vitiligo, and many more…

If you suspect you are sensitive to gluten, it is always a good idea to get tested for celiac disease first. Even though most people that are intolerant to gluten do NOT have celiac disease, it is still a very good information to have.

And if you are found to have celiac disease, have all of your family tested too because there is a big genetic component to it and even if they don’t have symptoms now, going off the gluten will help them stay healthier, feel better and minimize their risks of developing other autoimmune conditions.

Testing for celiac disease is not accurate if you are already on a gluten-free diet, so that’s why it’s best to get tested before going gluten-free. If you are already gluten-free, you would have to start eating gluten again (the equivalent of at least a couple slices of wheat bread or 1 cup of pasta a day for 4-6 weeks) for the test to mean something. If you were tested for celiac disease while on a gluten-free diet and found not to have it, the result doesn’t mean anything and you could still have celiac disease. Keep that in mind because not all doctors are aware of this.

You can but it’s not likely to happen with your doctor. Either because they think it isn’t real or are unaware of it. You will probably have to go to a functional doctor or naturopathic physician and pay out-of-pocket for this test if you really want it.

But gluten is made of dozens and dozens of different peptides and you could be reacting to any single one of them. If gluten is the LEGO construction below, you might react to any of its building blocks (this is my husband’s by the way, I’m sure he’ll be thrilled I told you! 😉 ). 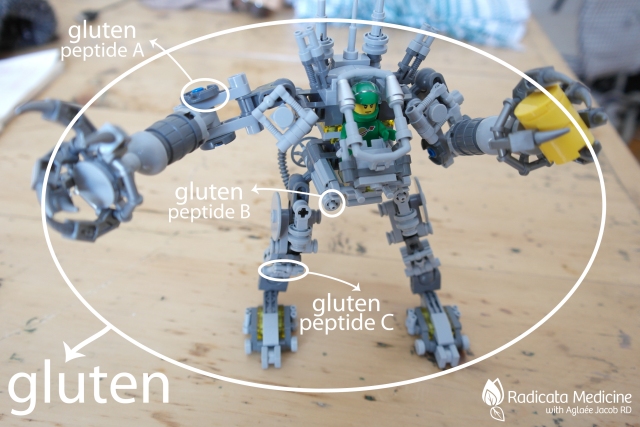 If you’re sensitive to gluten, you could be reacting to a variety of peptides (building blocks) but most labs don’t test for all of them.

The one good lab I know of is Cyrex Lab with its Array #3 (no affiliation). It looks at all the following 24 gluten and wheat peptides to minimize the risk of false negative (being told you are NOT sensitive to gluten when in fact you are):

I’m not aware of other labs doing this but let me know if you know any! 🙂

IgG testing is another to look for food sensitivities including gluten intolerance and wheat intolerance but I’m not a fan. I find that these tests tend to have low accuracy and validity unfortunately.

The best option if you don’t have hundreds of dollars to spend on a test to know whether you are gluten sensitive or not is to do an elimination diet. And guess what, it’s 100% FREE!

All you need to do is go on a gluten-free diet (make sure it’s 100% gluten-free and not just lower in gluten!) for about 4-6 weeks. Then reintroduce gluten and see how you feel.

Your body should give you a clear answer.

A very well-designed study was just published in February 2015, adding yet another proof to support the existence of non-celiac gluten sensitivity.

In this cross-over, double-blind study, 61 courageous participants reporting to be gluten sensitive were assigned to taking a capsule containing 4.375 g of gluten a day or corn starch for one week each, in a random order.

That was only for a week and with a very small amount of gluten. I also wonder what the results would have been like with a different placebo considering that corn is often GMO (in 90% of the cases) and that many people with digestive issues are often sensitive to it.

Here’s the most recent evidence supporting the existence of non-celiac gluten sensitivity.

What about you? Are you sensitive to gluten? How did you find out? What symptoms do you usually get?

Personally I’ve been 100% gluten-free since 2011 but the last time I was inadvertently glutened, I vomited for about 12 hours. I also felt nauseous, had brain fog and difficulty concentrating, insomnia, some depression, muscle ache and weakness as well as extreme fatigue. It took about 2-3 days to recover (fortunately my recovery is generally quicker now that my gut and whole body are healthier).

Not everybody has the same symptoms and that is what makes it
so hard do identify gluten sensitivity.

I was already eating gluten-free when I was tested for celiac disease so I don’t know if I have it.
And I guess I’ll never know because there is no way I’ll be eating gluten willingly ever again.

Print this study (link to the study here) and share it with your doctors,  gastroenterologists and registered dietitians because THIS is important

One thought on “Non-celiac gluten sensitivity is really REAL”