If you don’t know what SIBO is, check out this article first. 🙂

SIBO, or small intestinal bacterial overgrowth, continue to be one of the most common causes of IBS (irritable bowel syndrome) and IBS-like symptoms, including bloating, abdominal pain, diarrhea, constipation and flatulence in addition to being often associated with leaky gut, autoimmune conditions, food intolerances and even nutrient deficiencies.

SIBO is like a chronic infection in your gut. It is not that the bacteria overgrowing are pathogenic (causing disease like E. coli or Salmonella) but too many of them in the wrong location (small intestines vs large intestines) is a problem.

The good news is that if SIBO is causing your digestive problems,
treating SIBO should help you get rid of them!

I had SIBO myself and was able to get rid of it.
My digestion has been perfect ever since. 🙂
There’s hope!

SIBO is so common as a cause of IBS and related digestive issues, accounting to over 80% of them in some studies, that it should always be on your radar when trying to heal your gut. But it’s always best to get tested to make sure you have it (and if you do, which type you have) so you can then get the best treatment for it.

Testing for SIBO is done with a breath test (similarly to the test used to diagnose lactose intolerance and fructose malabsorption if you’ve heard of these before). A specific amount of liquid glucose or lactulose (not to be confused with lactose) will be given to you and your breath will then be taken every 15-30 minutes.

The lactulose test is usually preferred, although it has the inconvenient of requiring a prescription  (in the USA and Canada at least, not in Australia). Although the glucose test doesn’t usually require to go through a doctor, it is only good at identifying SIBO if it is located in the first 2 feet or so of your small intestines. Because your intestines are over 20 feet in length, it is not uncommon to miss it with the glucose breath test.

Another thing to look for when getting tested is making sure that the test lasts 3 hours (allowing to see what happens throughout your small intestines until the sugary solution hits your large intestine) and that both methane and hydrogen levels are measured.

Also, it is important to note that the preparation diet during the 24-48 hours preceding the tests is very important.

Antibiotic and probiotic use prior to the test
I’ve also had a client who recently took the test through her gastroenterologist but the results came back negative despite her having all the symptoms of SIBO. After a bit of questioning, she mentioned feeling a lot better when she took antibiotics for a dental procedure, which is a common feature of SIBO (along with bloating after meals). That round of antiobiotic was taken 3 weeks prior to taking the SIBO test… which means that the result of the breath test are INVALID! Antibiotics shouldn’t be taken for at least a month before the breath test. Probiotic should also be discontinued for a few days (check with your lab to know how many exactly) before being tested for SIBO.

Accuracy (or lack thereof) of the test
Despite doing everything right and getting the best test possible, SIBO testing is still not 100% accurate. Far from it. Actually, studies show that it is only around 65-70% accurate.

What does that mean? It simply means that a negative result (as in showing you don’t have SIBO) doesn’t necessarily rule out SIBO for you. If you have all the symptoms, you can discuss with your health care provider about the possibility of getting treated for SIBO based on your clinical picture regardless of the results.

What does NOT test for SIBO?
Stool tests CANNOT diagnose SIBO.
* Urine organic acid test might diagnose SIBO although more data is needed to confirm it. 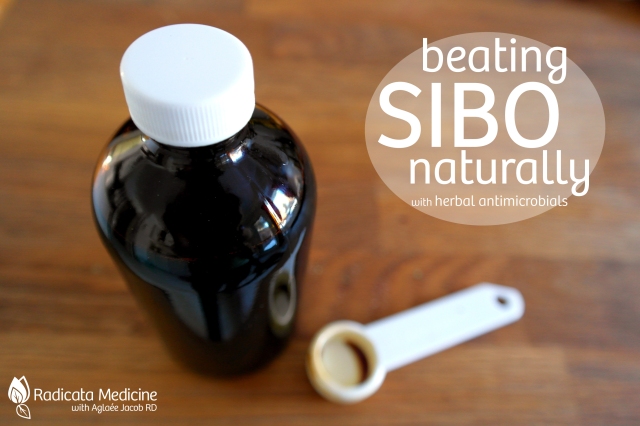 A study published in the scientific journal Global Advances in Health & Medicine in 2014 showed that herbal antimicrobials are just as effective as the antibiotic usually given for the treatment of SIBO. (pdf of the study here)

In addition, 14 of the 44 patients who still had SIBO after a course of Rifaximin were then treated with herbal antimicrobials, of which 8 (57%) were able to finally get rid of SIBO with this second treatment. Isn’t that interesting?If you already received antibiotics for SIBO but still suffer from symptoms, herbal antimicrobials might help you fight it! Don’t give up. This also shows how important it is to get re-tested because many people may need more than one treatment to fully eradicate SIBO.

The herbal antimicrobials used in the study were either one of the following combinations taken twice a day (2 capsules of each).

The above herbs are a few examples of the many herbs with antimicrobial properties and you should work in concert with qualified health care provider familiar with SIBO to select the best combination for you. Please don’t try to treat yourself on your own. Even though herbs are natural, they can be quite potent and can be contraindicated for some people or even interact with other supplements or medications. Herbal antimicrobials should also not be taken in the long-term in my opinion due to lack of long-term data on their effects on the gut flora.

How to be successful at beating SIBO

To make your SIBO treatment with herbal antimicrobials more effective, it might be beneficial to take them for longer, rotate different types of herbs or combine it with the right dietary approach. Please work in concert with a qualified health care provider to build the best protocol for you and don’t forget that more than a course of the same treatment or that a different treatment might be needed to completely get rid of your SIBO.

Usually, pure berberine and/or berberine-containing herbs, such as goldenseal, Oregon grape and baberry, are quite effective for most people but using different herbs with various mechanisms of action can increase your chances of being successful. ADP oil of oregano (affiliate link), which is an emulsified form of oil of oregano (not just regular oil of oregano), seems to be another great option that I used myself to successfully eradicate my SIBO.

A note about constipation-prone SIBO
For people dealing with a constipation-prone SIBO or with high levels of methane, allicin, the antimicrobial compound found in garlic, should be used (something that they didn’t do in the above study). It is possible to obtain high-dose allicin supplements that are FODMAP-free.

Don’t forget to adapt your diet and supplement plan
Eliminating irritants and inflammatory foods, such as gluten, soy, dairy protein as well as vegetable oils like canola oil, corn oil and soybean oil, can be very helpful to heal your gut while you’re getting treated for SIBO. Going low-FODMAP can also help you control your digestive symptoms more easily, but remember that a low-FODMAP diet is not a solution in the long-term (read why here).

You should also make sure your diet include an abundance of tolerated nutrient-dense foods to assist with the healing process and help you correct any nutritional deficiencies that might have occurred as a consequence of your SIBO infection. Some of my favorite gut-healing foods are liver from a healthy animal, grassfed butter or ghee and homemade bone broth. Some supplements like vitamin D and L-glutamine can also be very helpful in supporting the repair and optimal health of the cells lining your gut.

Probiotics from supplements or fermented foods (sauerkraut, kombucha, kimchi, kefir, yogurt…) can also be very beneficial in balancing your gut flora but they can be difficult to introduce in people dealing or recovering with SIBO, due to the excessive amount of bacetria already present in the small intestines. Once SIBO is treated, it is important to work on slowly and gradually integrating some form of probiotics to re-build a healthy gut flora and prevent SIBO from recurring in the future.

Special considerations about your carbohydrate intake while being treated for SIBO
In my book, I wrote a quick note in the SIBO treatment section about the possibility that treatment for SIBO (antibiotics or herbal antimicrobials) might be more effective when a little bit of carbs are present in the diet (as opposed to being on the strict elimination diet protocol I suggest to manage the symptoms until then and after the treatment).

It was just a hypothesis I had at the time considering that antibiotics and herbal antimicrobials are more effective when bacteria is actively replicating as opposed to in a starvation mode. I hadn’t found any studies on the topic and still haven’t, but can now confirm that it is the case for some people. It doesn’t mean that you should eat them in huge amounts, but just  a little bit  (50-100 g or so) might be a good idea. Again, some people, including myself, have been successful at eradicating SIBO while on a no-carb or very-low-carb diet too.

If you’re about to get treated for SIBO, it might be best to include a little bit of carbs in your diet to make the treatment more effective. However, you shouldn’t change anything to your carb intake if you’re in the middle of a SIBO treatment.

Address the root cause
The root cause of SIBO might vary from one person to another but it is important that you try to find what yours was if you don’t want your SIBO to come back. Could it be due to low stomach acid? An impaired migrating motor complex (cleansing waves)? A malfunctioning ileo-cecal valve (the valve between your colon and small intestines)? All of the above or something else? Don’t miss this SIBO if you want to say goodbye to your digestive issues for good.

You can learn more about the different common causes of SIBO and how to fix them in my book Digestive Health with REAL Food.

Want to work with me?

Are you ready to heal your gut and feel better than you have felt in a long time?
I’m taking a few new clients each month as part of my Radicata Nutrition Transformation Program.

If you’re interested in learning more, click below to learn more about it
and book your FREE nutrition appetizer call with me so I can learn more about
your gut story and see whether I could help you on your healing journey.

Digestive Health with REAL Food: the book and the cookbook